We leave the summer behind, and the new autumn / winter program arrives at the Gonzalo Menéndez Pidal Auditorium in El Espinar. Seven shows that make up a varied program for all ages that we hope you enjoy going to your Theater !.

We start on SATURDAY OCTOBER 12, within the PLATEA program of the Ministry of Culture, the best theater by the hand of 'MARIANA PINEDA' by Federico García Lorca, with version and direction by Javier Hernández-Simón (ADE Award 2009 and 2014), scenography by Bengoa Vázquez and design lighting by Juan Gómez Cornejo. The show stars Laia Marull (2001, 2004 and 2011 Goya Award) as Mariana Pineda, Álex Gadea, Óscar Zafra, Fernando Huesca, Marta Gómez, Ana Azorín, Silvana Navas, José Fernández and Aurora Herrero.

“Sometimes love is a deep sea where we die drowned, a place that at the same time is a prison and a horizon, a stopped time where not even the air happens. Sometimes love is a snowy summer ... a chimera, a story we tell ourselves to continue living. Mariana Pineda's love is like that. ” Javier Hernández-Simón

FRIDAY 1 NOVEMBER laughs guaranteed with the comedy: 'BALLENAS ASESINAS', with María Casal, Marisol Rolandi and María José del Valle, where the public is going to find a situation that could be real, but is not, and with some characters that we could Be any of us, but we are not. And it is that when we put value to life, everything can happen. It's eighty minutes for the funniest trip the theater can offer. Three voices fast, withering, fresh and from the heart. Although the heart, sometimes, does not know what it says. Not what he wants. Women who speak with different voices, sometimes innocent, sometimes perfidious, always fast and always intelligent. The comedy that all viewers would like to see.

Continuing in the key of humor we arrive at SATURDAY 16 OF NOVEMBER where we will have 'ENVIDIOSAS CLASSICS', a parody full of love to the work and characters of Shakespeare, but also marked by a crazy and grotesque comedy loaded with criticism and with a modern touch. In the play, Shakespeare's characters play in and out of their stories and characters, building a crazy situation comedy full of entanglement and surprises in the purest style of classic comedy but with very modern winks and nuances. All the characters in the play, both male and female, will be interpreted by men, a comic resource that I propose from the text as a source of comedy and a heartfelt tribute to Elizabethan theater, a theater in which women were not allowed to act. For me this text has a basic purpose like most of my theater: to amuse and entertain the viewer. Juanma Cifuentes (Director)

Of course, THE SPINAR MUSIC BAND will have its two usual appointments on these dates. He SATURDAY 23 OF NOVEMBER He will hold his CONCERT OF SANTA CECILIA, in honor of his employer and that serves as a preamble to his celebration. SATURDAY 21 OF DECEMBER He will offer his traditional CHRISTMAS CONCERT with the special collaboration of the solo voices of MUNDO LÍRICO. With the teacher Ignacio Rincón at the head of this project that each appointment manages to conquer us, a sign of municipal identity in a first-class national concert that will undoubtedly, as every year, surprise us with a new repertoire.

El FRIDAY 6 OF DECEMBER from the hand of Yllana, the great masters of comedy, we will visit 'THE OPERA LOCOS'. Five lyric singers are the protagonists of The Opera Locos, an operatic comic show in which the great successes of the opera merge with other musical styles in the most original way. With a unique staging, careful aesthetics and sense of Yllana's comedy, The Opera Locos manages to create a new and different experience when it comes to experiencing opera and, above all, bringing it closer to all audiences in a fresh way, Unusual and fun. A battle of egos full of opera and humor. A peculiar opera troupe, composed of five eccentric singers, set out to perform a recital with a repertoire of the greatest composers of the genre. Throughout the performance, the hidden passions and desires of each of them will be revealed, which will have crazy and unpredictable consequences. It will be a night to remember!

We arrived at DECEMBER 15 SUNDAY where we will have 'CANTA CUENTOS', a musical show for all ages, which reviews the best known children's songs. Through live songs and fun situations, children will learn from the hand of their favorite characters values ​​such as friendship and companionship, singing, playing, dancing and laughing, as well as the importance of maintaining paternal-affiliate relationships through from, for example, reading stories. The show features singers-actors of musicals that interpret the most representative songs.

To check prices and performances visit the following link: http://www.elespinar.es/images/content/files/1119/programa_otono_teatro_elespinar_2019.pdf 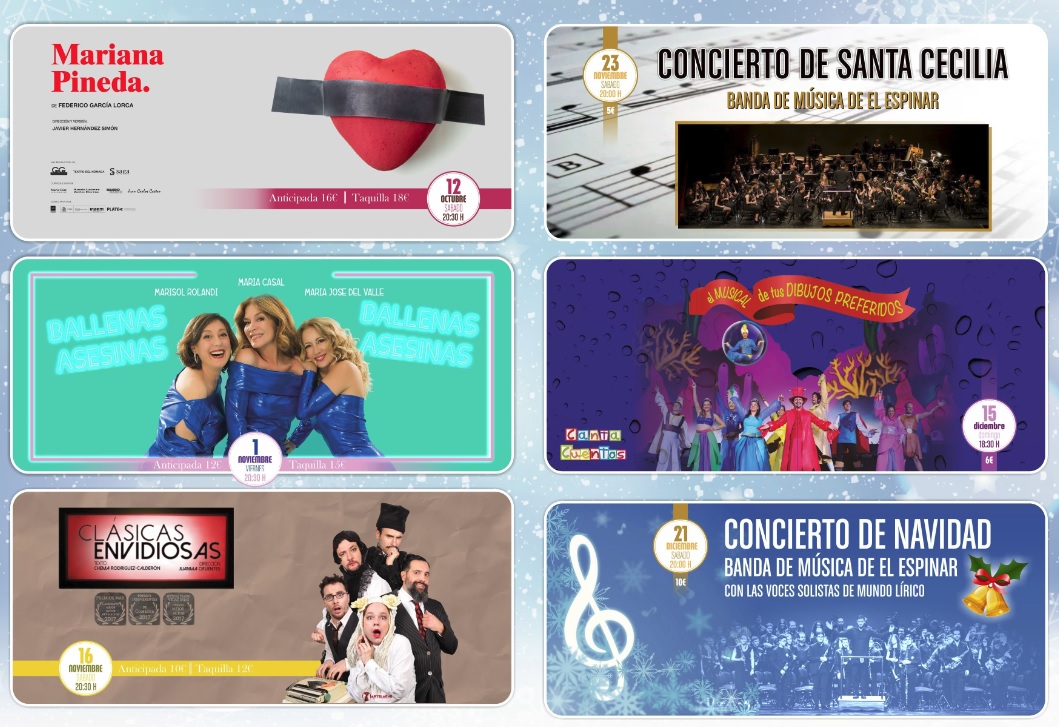 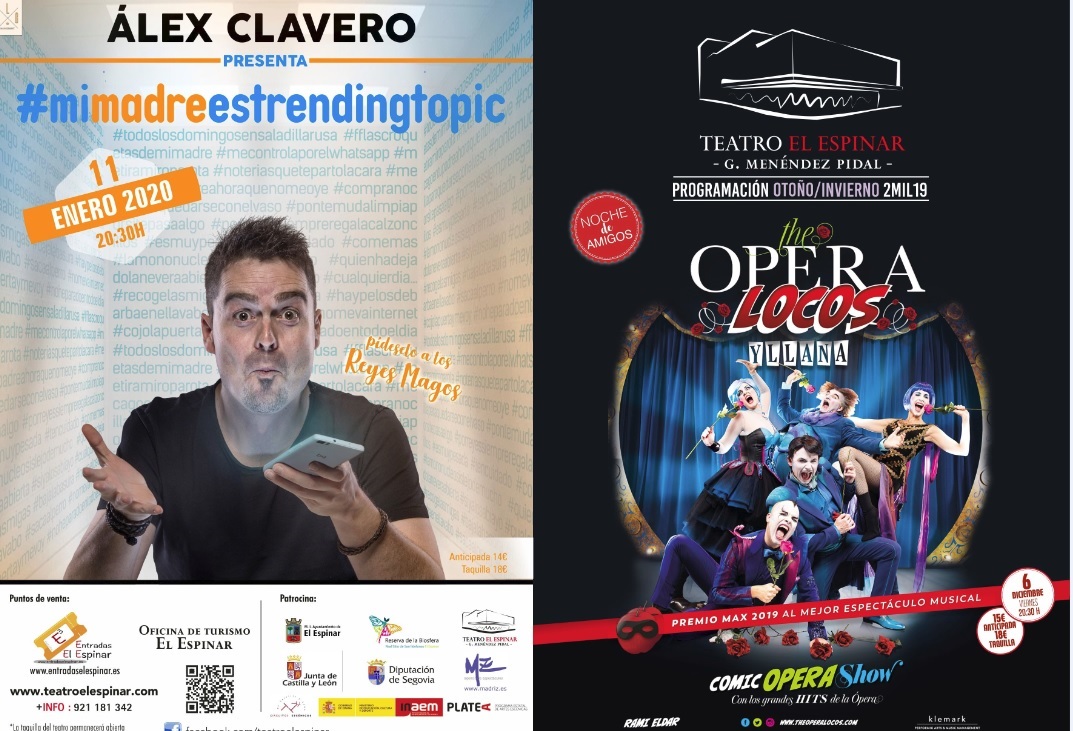