On Saturday 19 of October, in the Church of Dominican Nuns - located in the Plaza de la Trinidad - in the celebration of the Eucharist at 19,00h. The Madrid choir “Schola Gregoriana Matritensis” will sing in Gregorian and at the end of the celebration the same choir will give a concert. 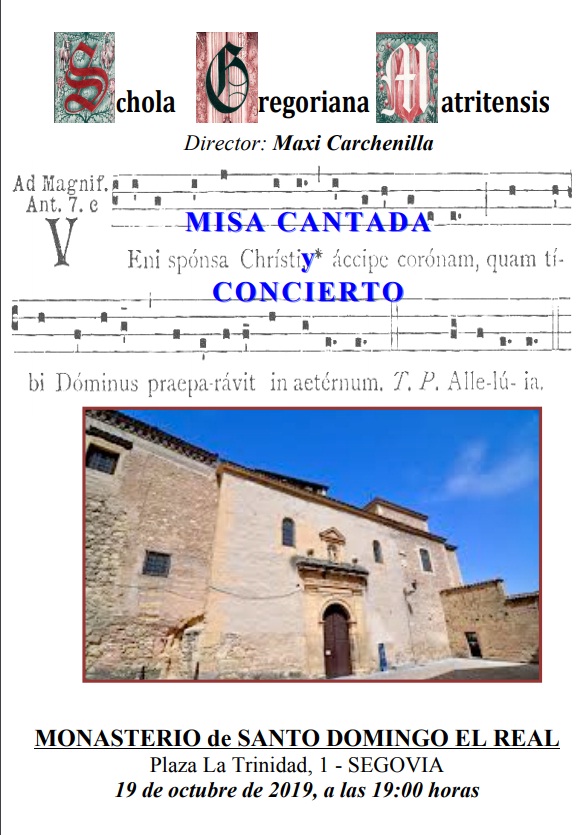 offers interpretation
of this Mass and Concert,

with the aim of reaching many
the simplicity and richness of Gregorian chant.
on the occasion of festive celebrations.

1 CV of SCHOLA GREGORIANA MATRITENSIS
The Schola Gregoriana Matritensis, is created under an initiative of
Maximino Carchenilla, following his musical, creative and artistic restlessness.
The Schola Gregoriana Matritensis, begins its formation in May of 2013,
and a few months later it is formed as a musical group, giving its
inaugural concert, as a “musical baptism”, on 24 day of
November and on the occasion of the feast of Santa Cecilia, patron saint of
how many are dedicated to music, (November 22), in the Parroquia Reina
del Cielo, from Madrid, acting as “godmother” Mrs. Carmen Laseca,
President of the Coral Federation of Madrid.
The Schola Gregoriana Matritensis, composed exclusively of voices
male, aims to investigate, cultivate and disseminate the song
Gregorian.
For this, it has been marked as annual musical milestones: Concert with
Santa Cecilia holiday motive - Christmas Concert -
Holy Week Concert - Meetings and exchanges with others
scholas.- Interpretation of masses - Other celebrations and events
cultural.
You can check their specific actions on their website.
He has prepared a special concert under the name “LA VOZ DE LAS
FIRST MUSIC ”composed of Gregorian music themes,
songs of ancient codices, medieval polyphony and songs
Traditional.
The Schola Gregoriana Matritensis wants to participate in her music, to
those who feel this musical restlessness, wish to share that artistic joy
and want to get excited with Gregorian chant as he sings in his "hymn"
composed of its director:

(The Schola Gregoriana Matritensis interprets with simplicity and dignity the
Gregorian chant, cradle of universal music)

3 CV of MAXIMINO CARCHENILLA
Maximino Carchenilla González (IMPROVED - Toledo, 1950)
Since he was little he emphasizes his inclination to music.
At 8, he is part of the School Choir of La Salle-Talavera School
(Toledo), to join three years later at the Escolanía del
La Salle-Griñón Training Center (Madrid). Later is

Appointed Chapel Master (1968) at the La Salle Training Center
Pomegranate. It happens successively to be Director of the Escolanía and Teacher

of Chapel of the Training Center La Salle-Griñón, for six years,
subsequently developing in other educational centers the position of
Choirmaster.
To all this experience we must add his studies of solfeo, piano,
guitar, harmony and choral ensemble, performed at the Royal Conservatory
Superior of Music of Madrid, besides diverse courses of pedagogy
musical. choral direction and musical composition.
He teaches music training courses for music teachers, both
face-to-face as online, with various institutions: Prodidac, FERE,
ICCE ...
His musical restlessness leads him to form the popular music group
REDOBLE and the Sephardic music quartet SIMANE; with this last record
the album "From Sepharad to Thessaloniki." In 2017 this activity resumes
group.
It is also dedicated to the composition and recording of musical works
Pedagogical, catechetical and religious with various publishers: PPC, San
Pablo, San Pío X, SM, Bruño, Edelvives, Oxford, McMillan ...; fits
highlight his work dedicated to the teacher "You taught me to fly"
In the year 2000 created in Madrid the Coral STELLARUM, participating in
musical events of different types: meetings, contests, events, Mass
on TVE ..., which has been its director until 2017.
He has collaborated with the Schola Gregoriana Caesarobrigensis and with the Coral
Polyphonic Salvador Ruiz de Luna, from Talavera de la Reina.
He was also founder of the Voices de Mejorada group, of which he was
director up to 2010.
He has been the director of the Coral CEPA, of Pozuelo de Alarcón (Madrid)
He currently combines various activities as a pedagogue,
musicologist and composer. It is worth highlighting your lesson with more than 160