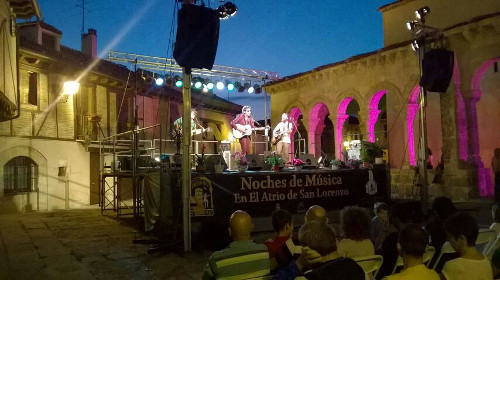 Festival considered one of the most important in Europe in its genre. It involves artists from all over the world who perform in the streets, courtyards, Teatro Juan Bravo, etc.

It is celebrated coinciding with the dates of the May bridge, artisans from all over Spain participate with live workshops.

Music Nights in the Atrium of San Lorenzo

Concerts are held every Friday in the Plaza de San Lorenzo, which still retains its medieval layout.

It includes conferences, round tables and tastings. Stresses the Piglet Festival where homage is paid to the protagonist of the gastronomy of Segovia.

It is celebrated in the Plaza de San Lorenzo and offers a wide range of crafts, musical performances, workshops, theater and games for children.

Stories of different traditions and places, stories and stories of classic and contemporary authors, organized by the Municipal Theater Workshop.

Gastronomic Days of the Cod

A solidary march through the streets of Segovia whose collection is destined for an association.

Race where unimaginable places are seen very close to the city of Segovia. They are 10 or 17 km full of magic and sensations.