The La Granja and Riofrío palaces received more than 85.000 people in 2020

The Royal Sites of La Granja de San Ildefonso and Riofrío received 2020 visitors in 86.529, in a year marked both by confinement, which allowed it to open only nine months, and by sanitary restrictions, with limited capacity and groups.

Last year the Royal Palace of La Granja was one of the stages of the first edition of the 'Jazz Palacio Real' cycle, which was very successful between the months of July and September, guaranteeing limited capacity and the rest of the sanitary measures for the 7.000 people who enjoyed the 28 scheduled performances, such as those of Ara Malikian, Zenet, Andrea Motis and Dulce Pontes.

In 2020, the National Heritage monuments received the visit of a total of 867.971 people, of which almost half, 423.162, visited them after the reopening from June. For months, during the pre-confinement stage, in January and February, National Heritage experienced an increase of 5.000 visits each month compared to the same period of the previous year. After the reopening, as of June, the busiest months were August and December with 103.273 and 69.918 people, respectively.

To these data must be added the visit in 2020 of more than 1,5 million people in the nine green spaces where National Heritage has implemented an access count system, highlighting the gardens of the Island and of the Prince of Aranjuez, with 355.750 and 208.163 visitors.

Since the reopening in June, Patrimonio implemented in its spaces a health prevention plan against Covid-19, with measures to reduce capacity, the suppression of guided visits, the signaling of circulations, the mandatory use of gears and a mask and the temperature control, always in accordance with state regulations and with the instructions of the five autonomous communities where the Royal Sites are located.

Since October, when the campaign to reduce the price of tickets by 50% was launched, the Royal Sites registered the visit of almost 167.700 people. This promotion helped increase visits compared to previous months in monuments such as the Royal Palace of Madrid and the Monastery of San Lorenzo de El Escorial, and will continue in force until March 16, 2021.

The National Heritage social networks have been another of the institution's great bets to reach citizens. The year 2020 closed with more than 50.000 followers on Twitter and almost 10.000 on Instagram.

Yesterday the Royal Site of La Granja and Riofrío reopened its doors, after a few days closed to the public, due to the consequences that the passage of the storm 'Filomena' has generated in the center of the country. Visitors can discover the beauty of La Granja covered in snow. 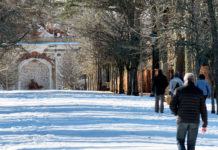