The most appropriate thing is to remember the motto that fifty years ago (1970) named and defined the town: “Cabañas de Polendos. The people of always at the rhythm of today ”. Many summers have passed since those lavish and unforgettable years, which is why those festivities in honor of the patron Saint Lawrence were a novelty and avant-garde. That golden age, with a population of just over three hundred and fifty inhabitants, broke with the insipid tradition and inaugurated years of freshness and modernity. Fireworks and dancing with a group of light music composed of drums, electric guitars and a singer, who went by the name of Los Sonados. In the town square the costume contest was inaugurated as well as different dance contests. Reading in the cup that you won in the soccer tournament, for example, that it was donated by the Ministry of Culture, gave a little more value to the trophy. If these and other shows made the party popular, together with the El Chopo and Los Galgos peñas, the visit of different hunters for the International Clay Shooting contest gave the celebration universality, everything included in the printed program showed the different shows that could be selected according to taste. The most remarkable thing about the program were the photos of what happened in previous years.

Yes, it all happened at the end of the sixties and beginning of the seventies of the twentieth century. But twenty years ago (2000), another prodigy at the rate of today, mobilized outsiders to settle in the town, in Cabañas de Polendos. It was intended to be the trigger against the depopulation of rural areas (emptied Spain). “You had to create something new that would attract the youngest. Organize an innovative project that will energize the life of the municipality ”. These are the words of Emilio García, architect of Las Caravas when he presided as mayor, today absent from the Consistory, the Town Hall of the town.

The Caravas? Empty and dilapidated corrals showed anything but modernity and cleanliness. Acquired by the municipality, these lands were used, which ended up turning, a thousand square meters, into a craft center in which different professionals will compose a series of workshops in which to develop their specialties. Jewelery works, world woods, engravings, graphic arts, potters, etc. and the essentials for a social life, the bar-restaurant. This meant that some artisans settled in the town, increasing the population in this way and an infantry, boys and girls, arose, upsetting the streets, giving life and future to the municipality. The idea took hold and years later, behind the parish church, Caravas II emerged where new and different artisans filled the new spaces created for this purpose, giving animation to Cabañas de Polendos. All this combined with the increase in rural tourism houses, currently there are seven houses and three apartments that make up the tourist activity and the restaurant El rincón del tuerto Pirón, which, recently renovated, encourages gastronomy and visits.

In short, Cabañas de Polendos is ahead of today's rhythm and repopulates Castilla before the proposals, always dubious, of the autonomous government. The current census amounted to 177 residents, 60 more than twenty years ago. Without a doubt, Las Caravas bring art to the rejuvenated neighborhood. Congratulations, twenty years is nothing. 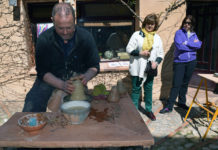