The Castellarnau house opens the Sundays of Heritage cycle

The Tourism area of ​​the City Council of Segovia has advanced the programming of the XII edition of the cycle of visits 'Heritage Sundays' that, as in the previous ones, seeks to 'discover' the cultural and natural heritage of the city less known or semi-hidden for the general population. In addition, another of its attractions is again the selection of guides or drivers of the twelve activities scheduled on a Sunday of each month of this year 2020.

The program begins next Sunday, the 24th, with a visit to the House of Joaquín María de Castellarnau with Javier Giráldez, a relative of Castellarnau, as a guide through this property that belonged to the distinguished forest engineer, born in Tarragona in 1848, who arrived to Segovia in 1871 and died there in 1943.

Castellarnau held the position of engineer of the Commission for the Service of the Pinar de Valsaín and in 1913 he was appointed president of the Corps of Forestry Engineers; In 1934, the Royal Academy of Sciences awarded him its highest award, the Echegaray medal.
His scientific interests were very broad, his activity extended to microbiology, microscopic photography, botany, zoology, ornithology or astronomy.

Castellarnau's house is located on Calle de Martínez Campos, in the walled area of ​​Segovia. In the garden of the site, the one known as the Cedro de Castellarnau, a great cedar from Lebanon, is remarkable both for its age and for its size and location.

The architect Alberto García Gil will star in February the walk 'From the Azoguejo to the Plaza: the living room of the Segovians', a historical, perhaps nostalgic, tour through the Calle Real de Segovia as a meeting place and management of its inhabitants .

Instead of a visit, in March there will be a dialogue about the House of the XV Century between Aurora de la Puente and Ángel Serrano, with journalist Angélica Tanarro as moderator. The historian and specialist in sacred art Mercedes Sanz, one of the regular patrimony Sundays and always with interesting proposals, will guide in April through the Altos de la Piedad, while in May the cycle will be dedicated to the birds of the city of La hand of Abel Herrero (biologist and professor) and Francisco Javier Sáez Frayssinet (physicist by profession and naturalist by vocation), both members of the GeoBiosphere Forum, who chairs the second.

María Pía Senent Díez, director of the Provincial Historical Archive of Segovia since 2014, will be the host in June for the facilities of this center located on Capuchinos Alta Street, a building that housed two houses, possibly from the 1702th century, that the knight from Alcántara Juan de Ortega Lara y Angulo converted, starting in XNUMX, into a single larger house.

Alberto García Gil repeats in July but in the Canonjía, which is considered a unique example of Romanesque civil architecture. The prestigious architect will speak about this old neighborhood of the canons of the Cathedral and its unknowns.

The Vetraria Muñoz de Pablos Workshop will open its doors to lovers of Heritage Sundays in August, hand in hand with the two generations of artists from this Segovian family.

For the third consecutive year, the themed visit on disappeared religious buildings with Isabel Álvarez González and Alberto Herreras will be held in September.

The last quarter still holds interesting proposals: visit the Aqueduct weir in October, a tour about the important past of the manufacture of coins in the city, by the president of the Segovian Numismatic Association, Francisco Javier García Herrero, in November , and, to close, in December, a reminder visit of why Segovia was declared a World Heritage Site by Unesco.

Competition
As in previous years, Domingos de Patrimonio proposes a game: whoever guesses on which façade the window of the image that appears in the program is located (the one in the top photo) will enter the raffle for a square for one of the visits . Answers, in the CRV from March 1 to 7.

The program
January 24. House of Joaquín Mª de Castellarnau.
February 21st. From the Azoguejo to the Plaza.
March 14. The House of the XV century.
April 11. Altos de la Piedad.
May 16. Route of the birds of the city of Segovia.
June 6th. Provincial Historical Archive.
July 11. Walk through the Canonjía and its unknowns.
August 8. Vetraría Muñoz de Pablos Workshop.
September 12. Disappeared religious buildings.
October 10th. Weir of the Aqueduct.
November 21. Traces of the currency and its production in the city of Segovia.
December 5th. World Heritage.
INFORMATION: Visitor Reception Center and www.turismodesegovia.com 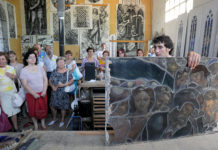