A month has passed since the Teatro Juan Bravo de la Diputación closed its doors due to the intensification of restrictions by the Junta de Castilla y León and, taking into account the latest news, which point to an improvement in the health situation of the province and also taking into account the fact that the Autonomous Administration has agreed to alleviate some of these measures, from the Provincial Council and the Theater Directorate it has been decided to resume the activity as of next March 5, as it had been scheduled on January 26.

For this reason, the Theater box office will open again from tomorrow, Wednesday -at its usual hours from 11:00 to 14:00 and from 18:00 to 21:00 from Wednesday to Friday and from 11:00 to 14:00: 18 and from 00:20 to 00:XNUMX hours Saturdays and Sundays- for the purchase of tickets and, in the same way, the Tickentradas platform will enable the sale of tickets for all the functions programmed in the month of March.

In addition, due to the delay in the curfew at 22:00 p.m., the Provincial Council and the Theater Directorate, which during these months have been working tirelessly - modifying schedules and rescheduling shows - in order to guarantee spectators a culture that brings together variety and quality and, at the same time, be safe, they have once again changed schedules for the greater convenience of the public and companies. "As the advance of the curfew forced us to schedule the shows at unusual and more complicated hours for those who work or have occupations in the middle of the afternoon, we have wanted to adapt to the situation again, being aware that our public is used to seeing them Adult performances do not begin before eight o'clock in the afternoon, "says Marco Antonio Costa, director of the venue, who points out that this also benefits companies, which have more time to set up their shows.

In this way, the Theater will reopen its doors on March 5 at 20:00 p.m. with 'Una noche sin luna', directed by Sergio Peris Mencheta and starring Juan Diego Botto, and will repeat the next day with the same show, that, set in the life and work of Federico García Lorca, has received great praise from the public and critics. That same weekend, the family audience will be able to enjoy on Sunday 'Semente, the man who planted trees' and then on the 12th 'Thaw', on the 13th 'Piedra', the 14th 'Don Quixote we are all', the 19 'Curva España', 21 'My pain is ...', 26 'Napoleón or the epic complex' and, finally, on March 27 the company La Sala Danza will close the program of the month with 'Luz' .

All the shows for adults will start at 20:00 p.m., while the performances of 'Semente, the man who planted trees' and 'Deshielo', aimed at the little ones, will begin at 18:00 p.m.

In any case, both the Provincial Council and the Theater Directorate want to remind viewers that, due to the health situation, the programming is subject to possible changes at any time, which, in all cases, would be governed by the regulations and restrictions established by other Administrations. Both are grateful once again for the understanding shown by the spectators throughout this year and hope that normality can soon reach the room, which until then will continue to take extreme precautions and disinfection measures and keep its capacity reduced. 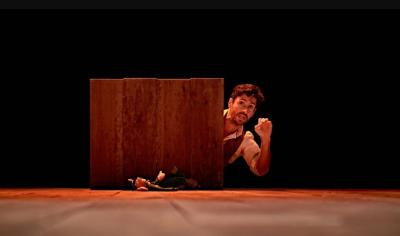