From tomorrow, Friday, April 9, and until next September 26, the Esteban Vicente Contemporary Art Museum offers its visitors the possibility of immersing themselves in the artistic universe of Gonzalo Borondo and in his vision of the inheritance acquired, both in terms of material as well as the immaterial, due to the land occupied by the current museum space, which was previously a palace, a house for nobles and even a 'hospital for the elderly'.

'Hereditas', which is the name of the new exhibition that Esteban Vicente houses, is a combination of modern art and transformation of the past that, as Miguel Ángel de Vicente, president of the The Provincial Council and the Museum Consortium, alluding to the definition of 'inheritance', has succeeded in making Borondo "cultivate the Museum space in a way that has never been seen before, both for the land and for the artist himself." And it is that, 'Hereditas', which takes the witness of 'La Montaña plana' by José María Yagüe in the 'Semillero de arte' - dedicated to the incipient talent of the province and sponsored and promoted by the Provincial Council since last year - is , as argued by its curator, José María Parreño, "a complex intervention in the Museum space whose purpose is to question the past from the presuppositions of the present and, specifically, to value the nature of the Museum as a place in which to preserve our Heritage for generations to come and show the wonderful ability of art to bring back to life objects that lost their original function. "

For his part, the artist explains the exhibition as "a kind of reconciliation of the place with the past"; a concept that started from the idea "of understanding, as in other works, the History of the place, its function, everything that encompasses the space and derives from the idea of ​​reflecting on Heritage, heritage and the past; and that past understood as the facts and events that make up a city that ends up being what it is against what it could not be ".

Through very different languages ​​and supports such as installations, painting, projections, animations, optical illusions, sound effects or making use of digital technology, Borondo, which for 'Hereditas' has not lost the opportunity to recover pieces from the past such as sculptures, columns, pieces of plasterwork or niches that are sometimes shown as they were conceived and on other occasions recreated in a contemporary key, pay homage to the natural heritage at the same time. Dividing the sample into the chapters Herba, Petra, Carnis and Eter, the artist alludes with his work to the vegetable kingdom, the mineral, the animal and the realm of the immaterial respectively; something that for Miguel Ángel de Vicente "brings out his creativity and his art in the middle of the nature of the Museum, in the same way that he manages to make nature sprout in the middle of his work and his original proposal, transforming the space into an unexpected place. for those who know him well and are faithful to the exhibitions that Esteban Vicente usually hosts ".

Nor is a museum a natural habitat for Borondo, who opens with 'Hereditas' in one and to whom both the Museum's director, Ana Doldán, and Miguel Ángel de Vicente appreciated having shown themselves "willing to experiment, interact and dialogue with this place , leaving your inspiration locked in a museum for the first time ". "I hope you have felt that at all times he was in full freedom", continued the president of the Provincial Council before ending by inviting the Segovians to come to Esteban Vicente "willing to experiment, to interact, to dialogue ... not only with the walls of the Museum, but with all its surroundings and its atmosphere ". 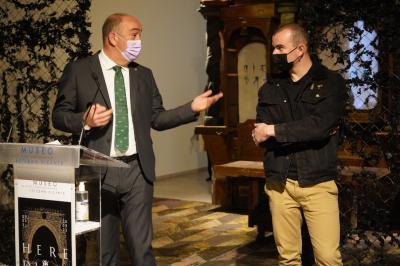