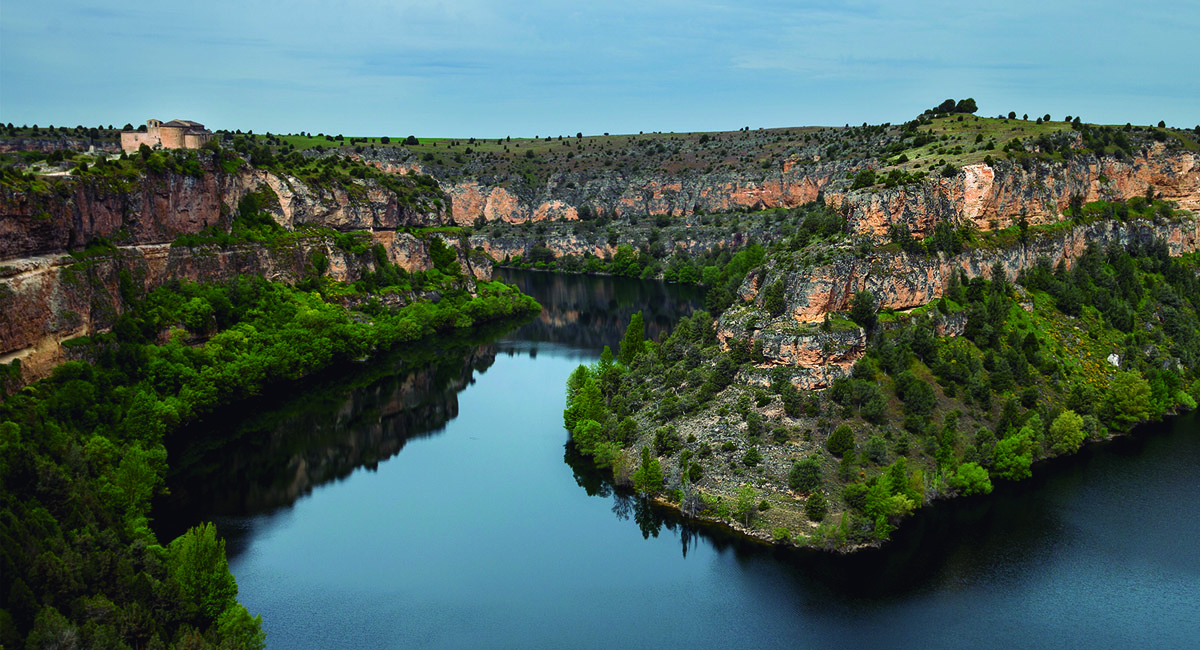 It is located within the limits of the Northeast region of Segovia. The environment contains an immense cultural heritage. The Hermitage of San Frutos and the Convento de la Hoz. You cannot miss a visit to the town of Sepúlveda. Declared a Historic-Artistic Site since 1951.

Character: hiking and mountain biking in the 90% of the route.

Description of the itinerary

Any visit made to the different itineraries existing by the Natural Park like Sepulveda himself, he should start obligatorily in the Casa del Parque located in the church of Santiago. Our visit will not only serve to delight us in admiring the excellent restoration carried out on the occasion of the works of the center, but to deepen the understanding and knowledge of the genesis that gave rise to the park, its fauna and vegetation and the different population centers that were established by these payments over time and traditional trades preserved to this day.

After receiving all this information we will be ready to embark on our journey, sure of understanding the beauty that will unfold before our eyes. We will direct our steps to the beautiful square of this genuine Castilian village where there are. Very difficult mission will be to dodge the irresistible smells that arise from the large number of stoves that give this villa international fame for its roasts. If we have managed not to fall into the temptations of the table we will go through the door or arch of Ecce Homo in the direction towards Church of the Virgen de la Peña. If we have time, it would not hurt to visit the Museum of the Fueros located in the church of Santos Justo and Pastor next to the newly crossed door, a recently created museum that tells us about the history of Sepúlveda and its community of Villa y Tierra as well as its rich heritage. The church of the Virgen de la Peña It is a Romanesque temple of a breathtaking beauty, but it did not seem of the same opinion who placed behind it, in the esplanade that faces towards the sickles, two blocks of flats inspired, who knows if in the postwar Soviet architecture. Fortunately, they left enough space to situate and condition a magnificent viewpoint on which to contemplate a good part of Sepulveda and the Hoces that embrace it. Next to the barracks of the Civil Guard, a path starts, delimited by a wooden fence and that leads us to the Puerta de la Fuerza. This was one of the seven entrance doors to the town and whose name in Latin septempública gave rise to the current name of sepúlveda. Lost the wall that defended it, do not forget that this was a borderland between Moors and Christians, stands proud before the first rocks and cliffs on which inquisitive eyes will not stop watching us from a distance, are the vultures grim to the that join a small court of diners and that they occupy the hollows of the rock that these do not colonize: crows, jackdaws and choughs. our path now continues towards the bottom of the valley looking for the Picazos bridge through which we will cross the river and continue once crossed this one to our left. The perfectly conditioned path will lead us to the limestone walls just above the gallery forest that from here we can contemplate in all its extraordinary beauty. Poplars, willows, alders, some ash and even some scattered maple foot will accompany the waters of the Duratón River until the end of our itinerary. After descending from this attractive path and after leaving behind a fishery of the old Light Factory, we will reach the height of a concrete bridge that crosses the river after which the remains of the Roman bridge of Talcano. This is just one of the many vestiges of the presence of this civilization are preserved, not only in this part of the land of Sepúlveda: Roman remains have been found in the Hermitage of San Frutos and in the cave of San Valentín They were preserved well into the twentieth century Roman graffiti that we realize that this was a place of worship long before the Segovia master decided to retire in a landscape so overwhelming accompanied by his brothers Valentín and Engracia. In the nearby village of Hinojosa, a small section of a Roman road that would connect Sepúlveda, Coca and even Cuéllar is still well visible.

From here and returning again to cross the concrete bridge, our path will follow the course of the Duratón waters in the direction of another bridge, which crosses the river in the direction of Villaseca and Sebúlcor. In this stretch of approximately 12 kilometers, the river travels imprisoned by reddish, vertical walls, whose height in some sections reaches more than 80 meters and accompanied by a riverbank forest in most of its route where the number of Poplars. These during the autumn, between the months of October and November, will give us one of the most beautiful postcards of this natural space: the change of tonality of the leaves turn the bottom of the canyon into an explosion of colors where the yellow dominates over the reddish tones of the walls and the green color of the junipers and pine trees that populate in certain sections the high parts of the canyon. It is not unusual to find on the sunniest slopes almond groves that like the walnuts were planted here thanks to the benefits of the microclimate at the bottom of the canyon.

At about 2 kilometers from the bridge downstream, located at the top of a sickle, is the hermitage of San Julián, abandoned to the passage of time, still lets glimpse some keys of its mystery, like the almost certain fact that it had a crypt under the altar or that one of its walls, the west gable, presents a factory totally different from the rest of the building, It is more, it can be deduced that it was a construction previous to the Romanesque building.

But the mysteries do not end there, downstream and perfectly visible from San Julián can be contemplated a curiosity of nature, the window of the devil, and is that so suggestive name does not seem out of place in a space with such devotion, if we think that all yin has its yan. It will appear for her or not the lord of the hell we will never know, as we will not know if the legends that circulate around the known Cave of the Witches, so called because the shepherds, who, by the way, were lurking more for these payments, claimed to hear voices inside, laughter and in some cases spells. It is no wonder that it was the mind, reheated in the summer sun, of those shepherds who heard voices when it was the wind whistling through their galleries looking for a way out. And it is that this river is prolific in legends, some more certain than others, but that have never been forgotten.

The Cave of the Seven Altars It is located a few meters from the bridge that crosses the river and the end of our journey. Suffice it to say that its name is due to the seven altars carved in the stone of the Visigothic cave and visible from the iron gate that today remains closed to the ground. These altars tell us of the existence of a community of hermits, of a temple, of a cult developed in the canyon of the Duratón river sickle, a cult that should have been hidden perhaps by invading forces ... and what better end for our Travel by this enchanted river.